Failure to flatter the curve may kill more people than we thought.

A spike in hospitalization (ICU etc), naturally leads to more deaths but scarily as these deaths may not only come from those who are hospitalized but also from those should have been hospitalize but were not due to many reasons which one of them is the health facility running out of capacity.

The number of active cases recorded in Malaysia as at 4 Jan 2021 is approaching the capacity at Pusat Kuarantin dan Rawatan Berisiko Rendah (PKRC) and gazette hospital to treat covid-19 patients.

Total number of cases are increase everyday especially involving level one and two cases i.e. about 89-90% of the total cases reported in Malaysia.

They need to be placed at PKRC and this facility is almost full now. KKM still see and give priority to cases where there is no suitable place for them to be quarantined like foreign workers had been place at PKRC at the MAEPS. KKM is looking at the criteria of whether level one and two cases can be quarantined at home. Level one is a patient with no symptoms, while level two is a patient with mild symptoms.

Efforts to "flatten the curve", that is, reduce or stop the increase of people infected with this covid-19 through public health measures such as mask-wearing and physical distancing are more important than simply keeping hospitals from becoming overwhelmed. Failure to flatten the curve, even before hospitals reach capacity, is killing more people than just those who end up in hospital beds.

This will lead to big implications as large numbers of students head back to schools and colleges across the nation and resistance to public health measures continues to stymie efforts to reduce the number of infected. 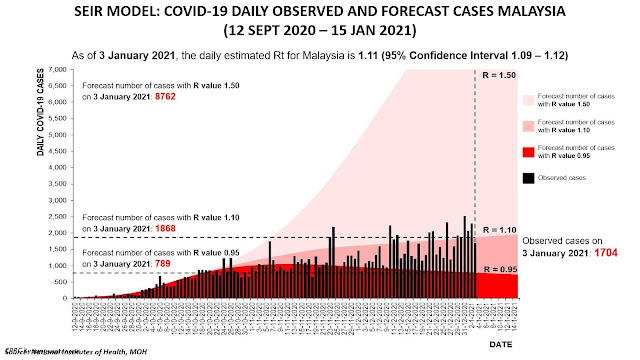